Community and School Segregation in the Urban South

How does the school you attended and neighborhood you grew up in impact your linguistic behavior? More specifically, does community or school segregation impact how changes to language spread? Our (myself and Charlie Farrington) recent research indicates that segregation may have a big role in shaping how you sound as you grow up. Specifically, using data from the Frank Porter Graham project and the Southeast Raleigh project, we found that students in highly segregated majority-minority schools were less likely to participate in sound changes associated with immigration caused by the IBM tech boom in the Research Triangle of North Carolina. Since the tech boom of the 60s and 70s, Robin Dodsworth found that this region was sounding less Southern. Yet, this pattern does not extend to students attending majority-minority schools. The correlation can be seen in the chart below. Generally, the incoming sound change results in pronouncing the sounds in words like TRAP and DRESS with the tongue lower in the mouth. However, students in majority African American schools retain the more traditional raised-tongue pronunciation. The effect is so strong that the vowel in DRESS words for students in majority European American schools sounds similar to the vowel in TRAP words for students in majority African American schools. This study provides yet another look into how societal structures impact the language we use every day! Learn more from the full article Here (article forthcoming in LAVIS IV proceedings through UNC Press). 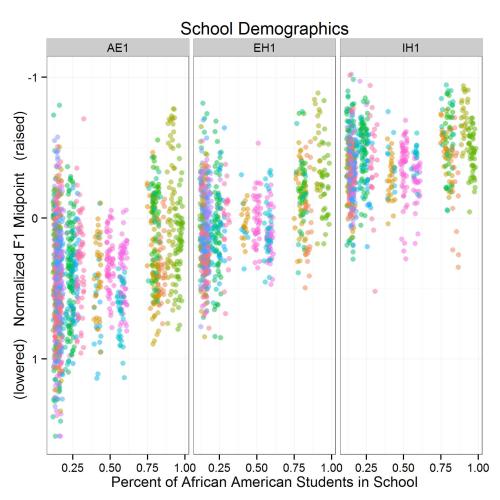